Modern tactical submarine combat on your Android Phone and Tablet! Its completely free , no ads, no in app purchases! The game is a mix of the strategy decisions and the arcade game-play. You have to care whit your ship control,  resources, potential dangers and whit the offense-defense tactics.

In the year of 2020 started a new Cold War for the resources and for the Antarctic territory between the word leaders. The Cold War continues to expand for the resources with heavy military present in the Antarctic Ocean .Total is around 200 ships, including U.S. aircraft carrier battle groups, many additional surface combatants (frigates through cruisers), floating bases , numerous submarines and multiple URGs (underway replenishment groups) to keep all the warships fueled, munitioned.

We are the the submarine pirates a small independent group in the Antarctic area. Our goal is reduce the military activity around our base and our oil-rigs . We have to protect our floating bases and oil resources to be able to survive.  Everybody in the this area is a potential enemy and everybody want to get our resources. We have to clear up our area every day. The floating ice mountains changes everything on each day. Sometimes we have really hard time to accomplish our missions.  Fortunately we have many secret technology  in our hand like teleportation , doomsday device , hacking tools and shield technology to be able to fight against many enemy.

The Antarctic area is changing every day because of the floating ice mountains, and structures, and enemy groups. You have to be careful ,you will never get the same issue twice. We need to collect every resource what we get in the battle. The challenge is that we have to be on surface  to able to collect every dropped item and than we have to deliver it to the nearest resupply position to able to save the items.  If we lost in a battle we will loose every unsaved item…

Do you find the games boring? Check out your own reality;)

– You need to save your items and money at the resupply points.
– To launch torpedoes you need to lock an enemy object. You can use the deck gun against the helicopters and other flying objects.
– The larger the ship , the more you need to spend a torpedo to its destruction. You may use torpedo damage booster against several heavy enemy. You can use additionally your plasma weapon.
– If you are on surface than you can be killed easily by  vessels from a longer distance. Check your map before you ascend to surface maybe there is a vessel in shooting range.
– Monitor your  health-level otherwise you can die and you can lost any unsaved item ( money , techpoints ). Upgrade points are automatically saved as soon you get them.
– Keep the number of torpedoes, anti-torpedo’s , and get tech points to be sure you can win any situation.
– In higher danger zone you will get more damage and you can earn more money and tech points as well.
– Once you earn the upgrade points in the missions  than you can upgrade your ship in the main menu.

– Collect Dropped items and underwater cargo containers. As the picture shows bellow you can collect different type of floating items. 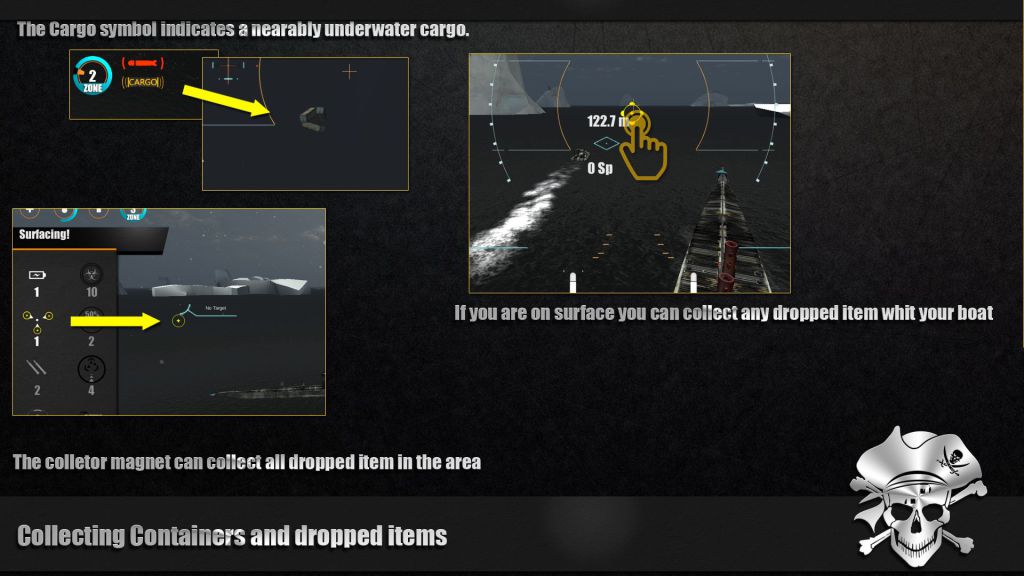 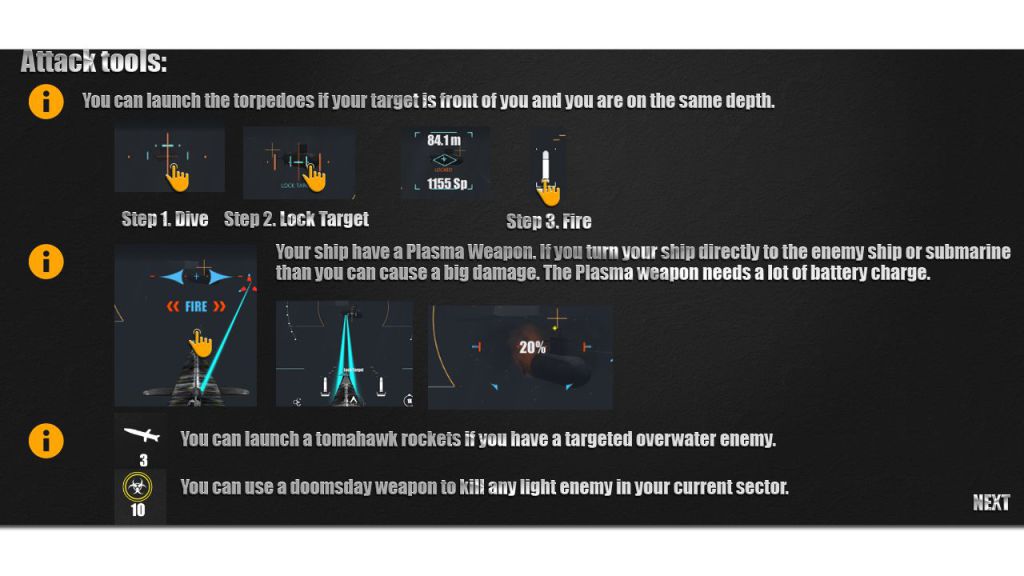 – To able to lock an underwater target you have to dive to the same depth and you have to head to the selected enemy. If you click on the enemy icon than you will start automatically descend to its depth. The image bellow shows the right targeting sequence. 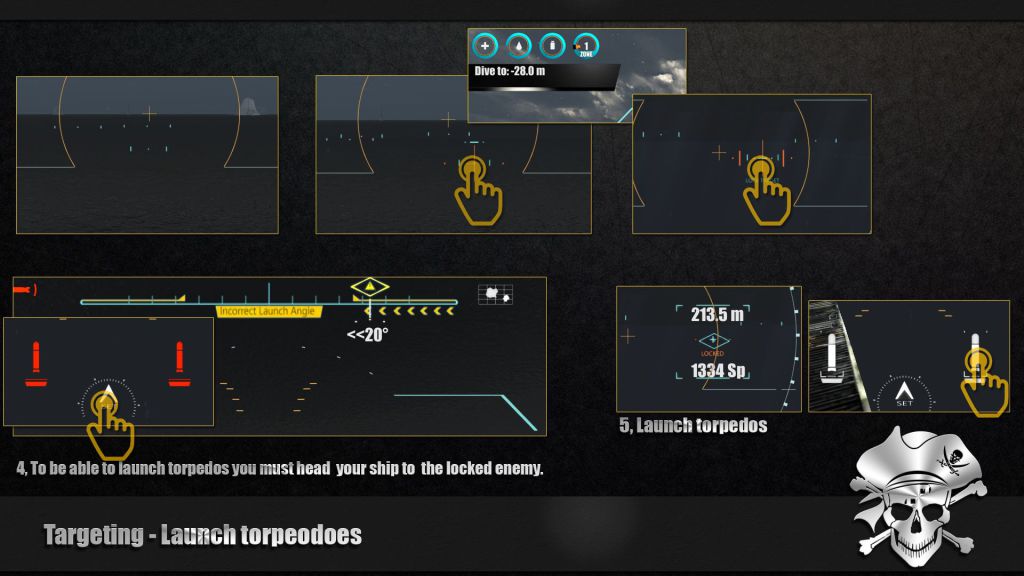 – If you want to target an enemy vessel than you should be on periscope depth. Once you see  “Lock Target” than you should click on it to able to launch torpedo’s or even a Tomahawk missile.

– Once you locked a submarine enemy you can launch your torpedo’s. The enemy´s launching torpedo’s as well so you have to eject  your anti-torpedo to mislead the enemy torpedo’s or you can click on the incoming torpedo and kill it whit your deck plasma canon (this needs battery capacity , if your batteries will leer you don’t have this option ) .

– If your health level become low you may leave the zone and repair yourself at any resupply position. You can upgrade your ship whit a self regeneration.   You have the ability to repair 50% during the battle using some tech-point.

– If you running ou from fuel or torpedo you can call an air resupply. This is the most expensive way to resupply but it is always available. Even if you don’t have money. You can open the map to see how far is the resupply airplane.

– Once you kill an enemy than it will left some resource (dropped item ) behind. You can collect these floating boxes if you are on surface whit your motor boat. You have to select each dropped item to collect it whit a motor boat.

– There is a lot of floating cargo and resource box underwater. You can find one and if you go near to it than you will get its content automatically .

– In the lower danger  zones the resources ,upgrade points and tech-points are cheaper as in higher zones. 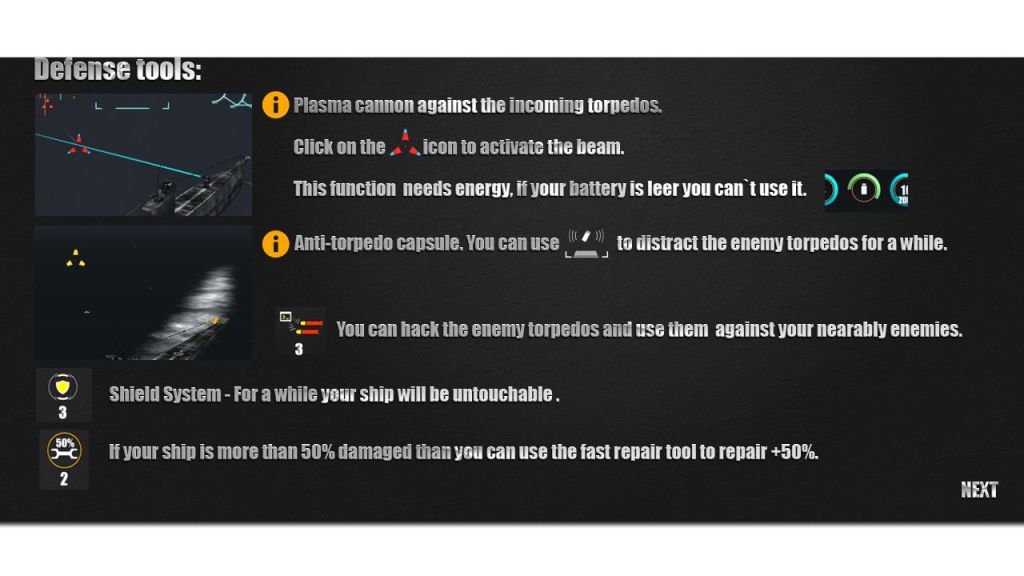 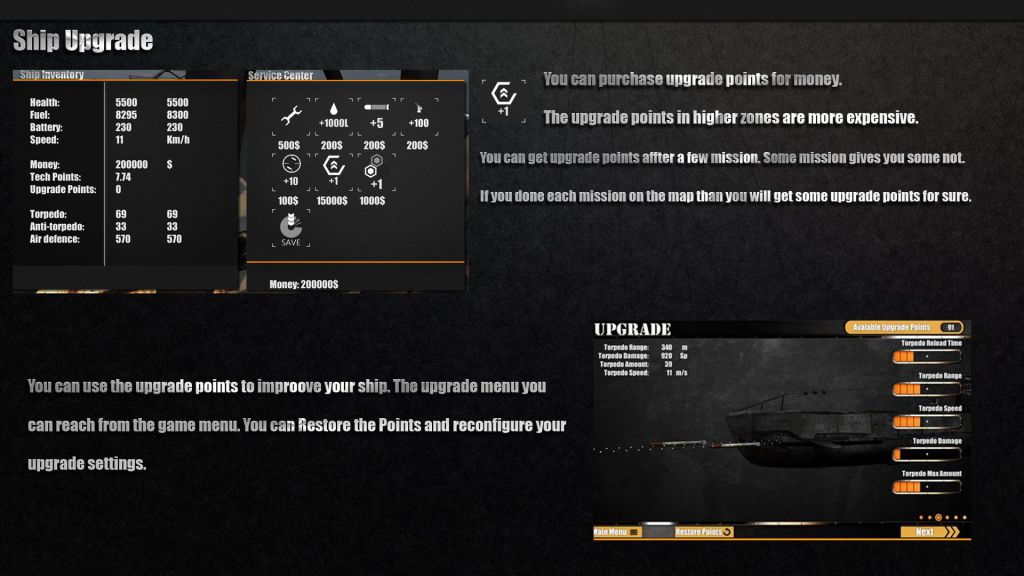 – The Game runs well just on a newer and stronger android devices  ( ie. Samsung Galaxy S6, Nexus 5 , Samsung S4 Mini ) . If your device is older than the Nexus 7 ( Tegra ) than the game can freeze.

– The game needs at least 60-70MB video memory. If your device have less than the game can crash or even reboot your device.

Quick Basic Tutorial Video for V1.0 ( Older how to play video but still handy for many cases )

Screenshots about the new 1.1 update 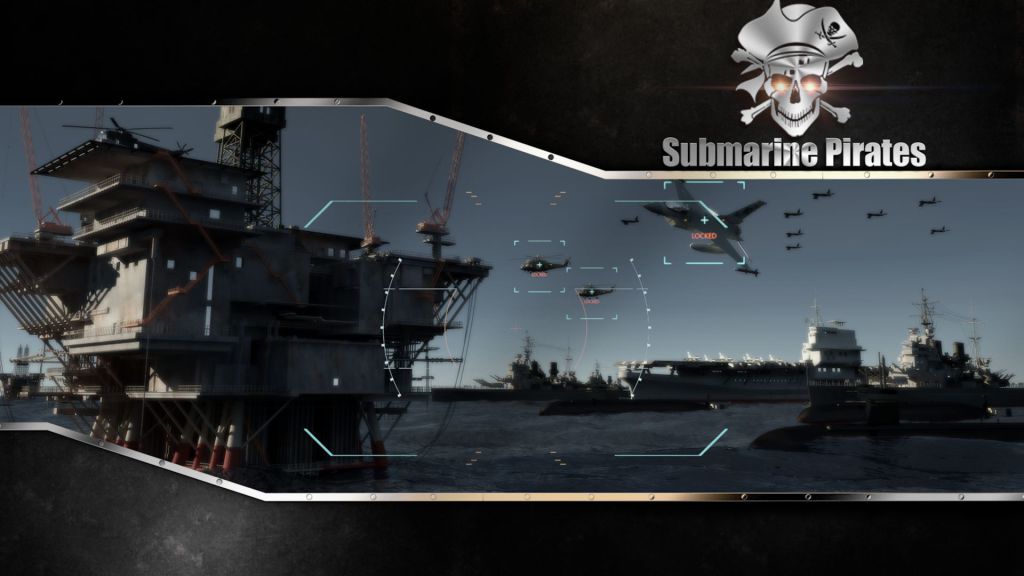 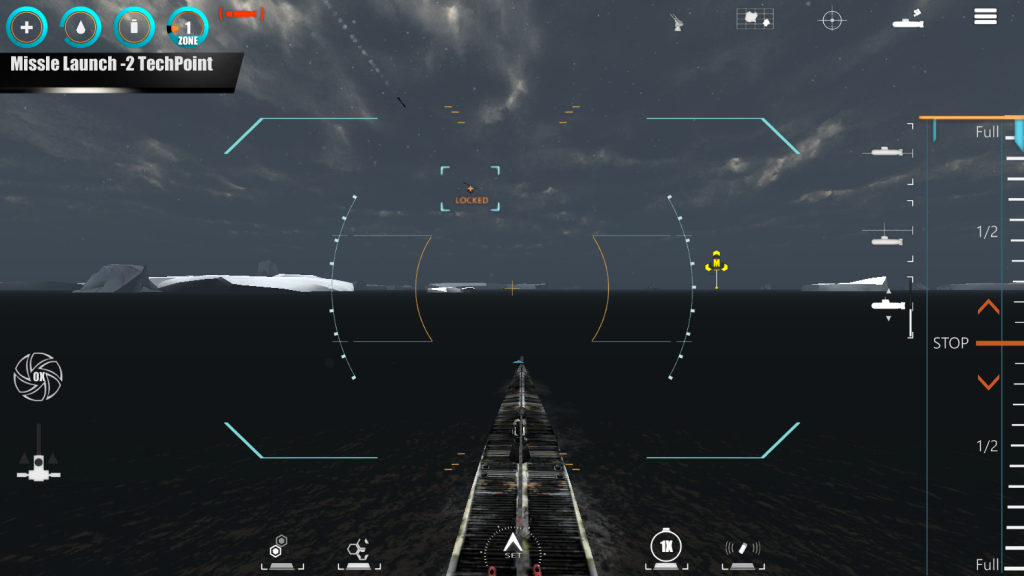 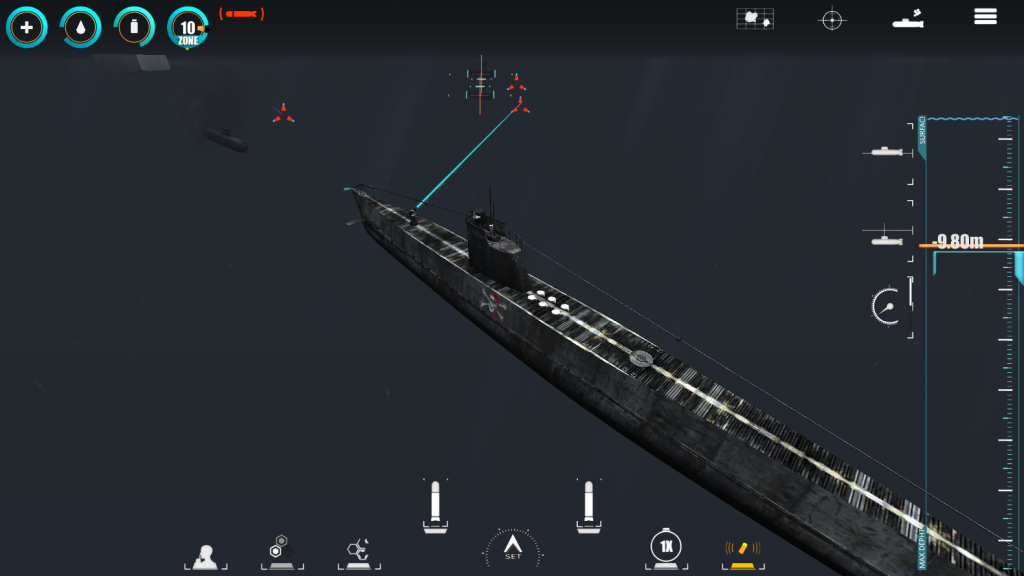 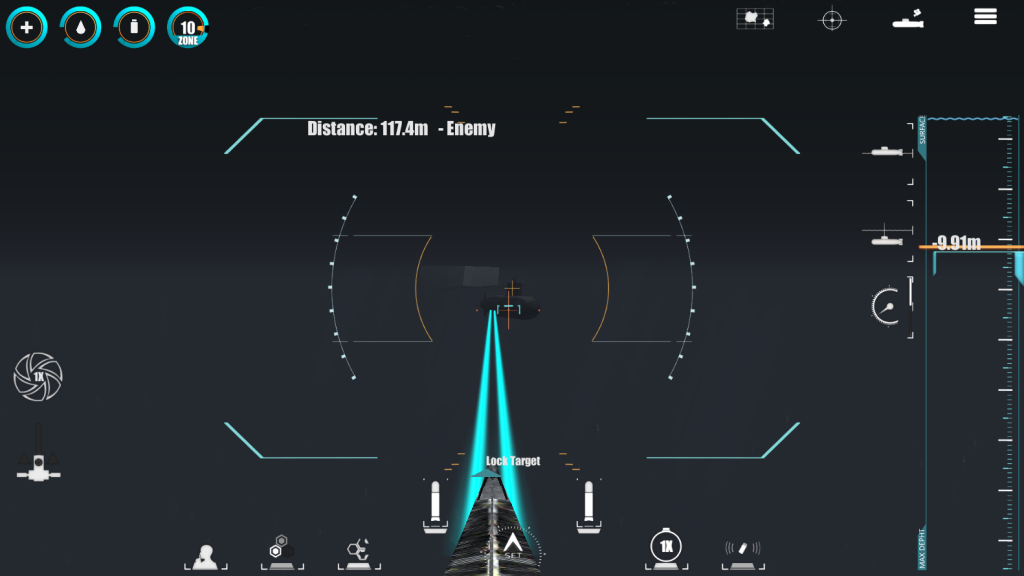